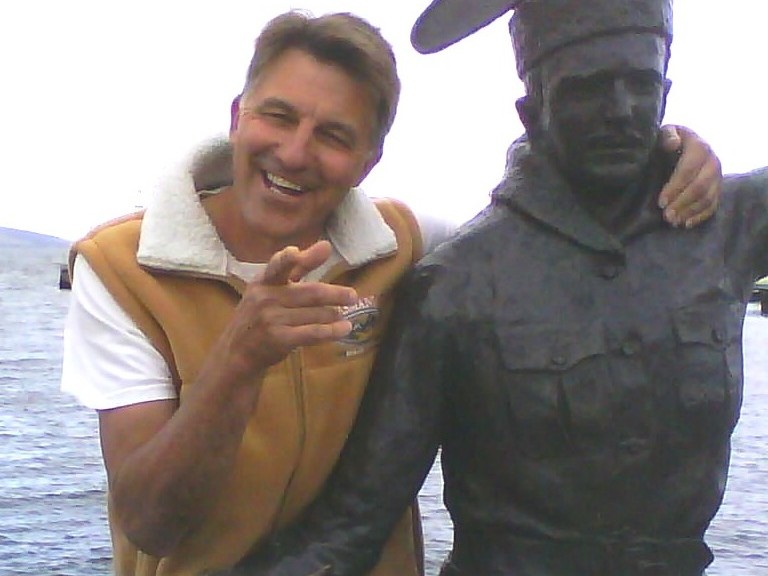 I was born in London in 1953. Dad ran a market stall selling anything and everything. He was a natural Cockney salesman with all the patter that goes with it but when he was told to give it up or die from the cold, we packed up shop and moved across the world to Australia.

Australia was great fun for a small boy from London, with snakes, kangaroos and sunshine. At school I didn’t do well, I was told that I was stupid, I was dyslexic. Then, when I was 15, I worked really hard at it all by myself and taut myself to read. The first book I ever read was called: The Silver Sword.

A couple of years later I won a scholarship to the University of Adelaide Law school. I bombed out of law but I started writing for the stage and I found that I could write funny lines and good dialogue.

After university I worked at anything and everything. I gathered together a bundle of money and went walkabout to North Africa, the Middle East, the Mediterranean, Russia, China, India, Thailand, Scandinavia, Scotland, France, Germany, Italy… and the heady heights of the northern English industrial town of Leeds.

While in England I wrote my first book: A Foxtrot Through India. I entered it into a competition and at the prize giving the judges loved it so much that they spent the night discussing my book even though I didn’t win the competition.

Also in England I met a girl named Sue swept her off her feet and carried her across the world back to Australia. We bought a hundred acres and spent a year building a mud bricks house. We planted apple trees, started to make cider and opened a cider business.

While crushing apples and making cider I invented a modern day action hero: Jack Hamma and wrote my first action adventure Shakespeare on the Roof. I have now written my Tenth Jack Hamma Action Adventure The Ten Musketeers there is no stopping Jack.

An Interesting point about Jack is he is so resourceful when the chips are down that readers of the Jack Hammer series say to me: ‘When I have a problem I ask myself: what would Jack do?’

4 thoughts on “All About Me”