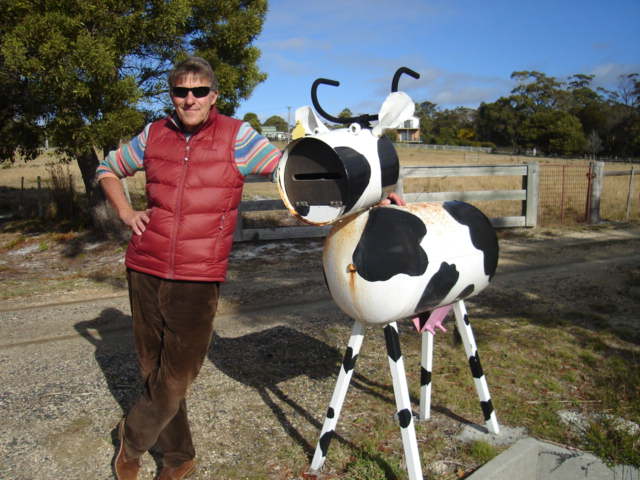 I called out to my wife: How do you spell dyslexit? She told me but by the time I came to write it down I couldn’t remember what she had said. I can be sitting at a typewriter, about to type a perfectly ordinary, perfectly everyday word, a word that everyone can spell without thinking about it, and I get a mental block, I have no idea how to spell that word. It’s often just stupid words such as story or storey, which one is which? Do you tell a storey or do you have a two story house? For a dyslectic these are matters of major importance, not quite life and death, but getting there. If I get the spelling of a word wrong I believe everyone will think of me as a prize idiot so I use a dictionary but I have no idea where to start looking for the word in the dictionary.

School always seemed a bit of a waste of time to me, it was a strange and foreboding place full of people running around and making noise and I was shy and unsure of myself. My first memory of school was being taken there by my two elder sisters Shirley and Susan. Mum told me that they would look after me and stay with me during play time and dinner time, so I would be alright. I remember standing all by myself at playtime waiting for my sisters to come, I stood on one leg and scratched myself with one hand, I stood on the other leg and scratched myself with the other hand, kids ran all around me and laughed, my sisters never came. The bell rang to go back in and sit on hard seats and listen to things I didn’t understand and at the last moment Shirley, my eldest sister, arrived asked me how I was and, not waiting for an answer, disappeared in a run, she was late for her class.

What I couldn’t fathom was: why was I at school? I didn’t know what the teachers wanted me to do, I felt dumb and feeling dumb made me lethargic and stupid. The other kids got on with their work, they seemed to understand what needed to be done, I just sat there bemused. I found the idea of spelling, reading and writing incomprehensible. What is this spelling thing? What are these words? I was supposed to write essays, but what the hell was an essay? Had I missed something somewhere?

I enjoyed history and was good at it. I could remember what the teacher told us but when she handed out tests I couldn’t read the questions and, even if I could have read the questions, I couldn’t write the answers. One day a teacher explained to us the difference between there and their, I sat next to the wall and copied both words from the blackboard onto the wall so that I would remember how to spell them and yes, I could spell them, but I didn’t know which one meant what.

I remember queuing up in front of the teacher’s desk to sound out words for her. I thought the whole thing childish and silly so I made my way to the back of the queue and made sure I stayed there. We had to write essays, I had no idea what an essay was so I wrote down letters in groups as if they were words: fabw votswk lofhjs qeudslxm ghdleopwcn mkopl wmwmwsk khtreqn mordbj kjsai qplmcz ddhglp and when I had filled a page I was satisfied that I had written an essay. The teacher must have looked at my essay and wondered which planet I came from.

Then our family took a bus to Gatwick airport and flew across the world leaving drizzly London for sunny South Australia. In Australia everyone played sport and I couldn’t catch balls, I felt a total idiot. But worse than not being able to catch balls, we had dictation. The teacher would read something to us and we would have to write it down and for every spelling or punctuation error we would lose a point. The dictation was marked out of 40 and the only saving grace was that we marked our own work, when I got down to minus five out of forty my embarrassment factor came to the fore and I would say that I got seven out of forty to try and save face.

My teacher in England, Mrs Gordon, had said to mum and dad that there was something in there – my brain I think she was referring to, but it couldn’t get out. Later at secondary school in Australia a teacher said to me that my answers were the best in the class and that I was the only person who understood the questions but she had to fail me because of my spelling. The best in the class but I failed – if you couldn’t read, couldn’t write and couldn’t spell you were well and truly in the shit when I went to school.

One day, for some reason, I was thirteen or fourteen, I kept working at the times tables until I learnt them by heart. I started with the easy one, the two times table, then I moved onto the ten times table and next the five times table and then I started attacking the hard stuff. Having mastered tables I began working hard at spelling. I remember getting the word neighbour down pat, and getting it right in a spelling test, I felt pretty good about that, I could spell the word neighbour, wasn’t I brilliant!

I was on a roll now and I taught myself to read, after a fashion. In class we had to read from books, out load, I couldn’t do that, however when other kids read out loud from books I followed on the page and memorised whole pieces and so was able to pass reading tests because I could, apparently, read. This wasn’t a complete waste of time as I learnt to associate written words with sounds, and began to recognise words, possibly as complete units rather than collections of individual letters, whatever the reason I very tentatively began to read.

My first day at high school we were given three books to read. A great tome called Moby Dick: ‘Call me Ishmael…There now is your insular city of Manhattoes…Circumambulate the city of a dreary Sabbath afternoon.’. I threw the book in the bin. There was a play called The Merchant of Venice: ‘In sooth I know not why I am so sad: it wearies me you say it wearies you; but how I caught it, found it or came by it…’. That hit the bin as well. Finally there was a slim little volume called The Silver Sword: ‘This is the story of a Polish Family, and what happened to them during the Second World War…’. I sat down and read it through, then I read it through again, it was the first book I ever read.

Even though I learnt to read, by my third year in high school I found myself at the very bottom of the school. The other boys in my class were only interested in sex or cars, I wasn’t interested in either. As a fun thing to do we were given a test on how to ask a girl out on a date, strangely I came top. Then the boys took a car apart and we were given a lesson on the internal combustion engine, the science teacher then gave us a test on that same internal combustion engine, again I came top. This was strange, I knew nothing about cars, apart from what the boys had told me, and I outclassed them in the test. Something was clicking into place in my brain.

My education had come a long way, I had progressed, but there was nowhere for me to go. I couldn’t move through the education system anymore, I was at the bottom of the school and on my way out. It was a hopeless situation for me until a teacher of Greek descent, Mr Frost, said to me: You are a smart cookie Tony, you shouldn’t be in this class you are getting straight A’s, I’ll have a chat to the headmaster and see what can be done. I was getting distinctions, lots of distinctions, for my work and I moved from the bottom of the school to the top and sat for the university entrance exams the following year. I came top of the school and was offered a scholarship to study law at the University of Adelaide. I had certainly come a long way from the boy who strung letters together, ad hoc, just to try to write an essay, but I had still never heard of the word dislextic or whatever it was.